St. Francis College of Education, one of the renowned Colleges of Education located in the Hohoe Municipality of the Volta Region, has hosted some Ghana Education Service(GES) teachers for their promotion aptitude test.

The aptitude test which is an initiative by the GES Management is a new strategy to reform the promotion process within the confines of the Public Services Commission (PSC) guidelines. The new procedure happens to be departed from the usual face to face interview.

The exams which was scheduled for 20th and 21st February 2020, took place at the College’s main auditorium and some classrooms. The College hosted over 800 teachers each day from the Oti and Volta Regions respectively, who applied to the PS and ADII grades. 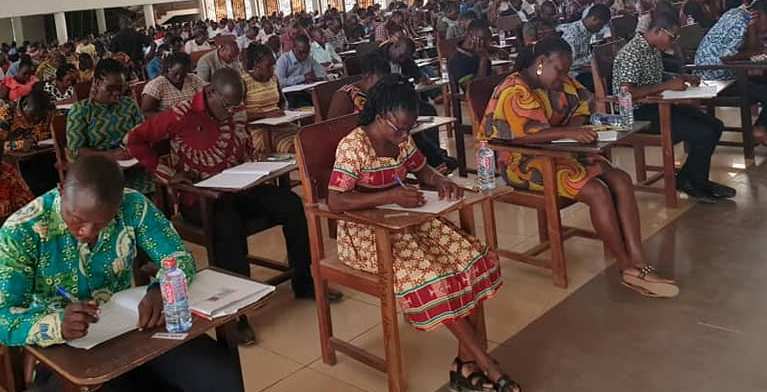 Dr. Hope Pius Nudzor, a Senior Research Fellow at the Institute of Educational Planning and Administration, University of Cape Coast, in an interview, expressed his amazement at the high level of discipline exhibited by the teachers towards the conduct of the exams. He said he had envisaged a form of indiscipline from the candidates, since this was the maiden edition of the new promotion process.  He congratulated the Principal and staff of the institution for their support in invigilating the exams and the general success of it.

Some candidates also revealed that, though they were unfamiliar with the new process, they still preferred it to the face to face interview.

The Deputy Regional Minister of the Oti Region, Honourable Maxwell Blagogee in his solidarity message, promised teachers a centre in the Oti Region in the coming year.

While the College provided a conducive and serene environment for the candidates, Management and staff of the institution urged the GES teachers to put in their best, as they exhibit their professional knowledge and skill through the promotional exams.